Of Eggs and Embryos

Hello and thank you for taking the time to read this.  This is a sort of instructional article explaining a tool that I find very useful and intriguing.  The idea itself comes from Dan Harmon and his Channel 101 website, which you should check out if you like Dan Harmon.  I take no credit for these ideas, I just want to spread them to you….

Archer Season 7 has finally been announced!  And in the same vein as Season 5, also known as “Archer Vice”, this one will be modeled after another classic TV series.  Take a look:

Looks awesome right?   The trailer is actually a shot-for-shot remake of the old Magnum PI intro; you can see them side by side here.  We knew Archer and the gang had to pick up yet another new profession after last season.  Personally I was expecting something along the lines of freelance mercenaries; they’ve always worked for the highest bidder before so it would make perfect sense.  I’m excited though, I can’t wait to see what Adam Reed does with it.

Just a couple of details about the show that have been released.  It will take place in LA, Hollywood specifically, where the ISIS gang has started their own Private Detective Agency.  And this in interesting: the new apparent leader of the group is Cyril, because as a lawyer he is the only one legally qualified to run the agency.  Can’t wait to see how that plays out.  A list of guest stars includes but isn’t limited to: Keegan-Michael Key (Key & Peele), J.K Simmons (Law & Order, Bojack Horseman), Patton Oswald (various), Christian Slater (reprising his role as Slater), Jon Daly (Kroll Show), Jon Glaser (Delocated, Conan), John O’ Hurley (Family Feud) and Dave Willis (reprising his role as Barry).  Apparently the show will have a whole new look too, a more California-style look, whatever that means.  And lastly, there will be some kind of ‘big secret’ hanging over the group’s head for the entire season.  That’s a lot of down-home Archery goodness right there.  Complete with a Seleckian-mustache.

So tell us what you think.  I know I am excited; Archer is one of my favorite shows and I know Adam Reed is capable of blowing us all away.  So make sure to toon in on March 31st on FX.

Okay welcome to our first Animation Archive article.  These articles will be about the history of our favorite cartoons, whether they are on air or not.  This specific article will be about the Cartoon Network original show titled Space Ghost Coast to Coast.  You can thank this show for all of the other cartoons you love to watch, because it’s the reason they are on TV.  But enough here, go read the article.

There has been a noticeable surge in animated content geared less towards kids and more towards us growed-up adult types in the past few years. They compete pretty fiercely with one another, pulling out all the stops with flashy animation and grabbing big names to cameo. However, these shows are all located on network cable channels or video streaming sites. The big time premium cable guys have stayed out of the fight…until now.

Come February 5th HBO steps into the ring with Animals. Aside from what I consider an odd choice of animation style, Animals seems like a pretty heavy hitter. Not only boasting an incredible list of very funny people voicing their characters they’ve also scored 2 members of the hip-hop community’s ASAP Mob, ASAP Rocky and ASAP Ferg. That is amazing in a hilarious sort of way (I would list a bunch of the other actors but, they did it for me in the trailer below). The show focuses on a plethora of animals living in an urban setting and I was skeptical at first but, the trailer is quite good. Besides, I’m excited just to spend most of each episode IMDB-ing every other character so that I can smugly grin to myself when I’ve correctly guessed the actor voicing them.

Hitchhiker’s Guide to the Rickstaverse

Hello Social Media bunnies, this one is for you.  Adult Swim has just created a Rick and Morty Instagram page.  Doesn’t sound that amazing does it?  Watch this:

Oh yeah, classic Rick and Morty.  Especially the Jerrygatchi.  Roiland and Harmon have taken things a step further and completely changed the interface of their page.  Now you can explore the Rickstaverse and find cool little easter eggs.  It’s like a little game!  Now, I (Reid) can’t say I’m one for Instagram or Twitter or any other Social Media platform, but this is just awesome.  Rick and Morty are continuing to take the world of entertainment by storm, and they show no signs of slowing down.  A decent trade off for the extra long wait between Season 2 and 3, though no one can blame Roiland and Harmon for how busy they are.  So go explore the Rickstaverse now!

This entry was posted in Random and tagged Humor, Instagram, Rick and Morty, Rickstaverse, Social Media.

Hello and welcome to our Programming Preview article. Since it is now 2016, we will be discussing a short list of some new programs we know are coming out on [Adult Swim] this year. Last spring AS axed one of my favorite shows, China IL, along with a selection of other series, including Aqua Teen Hunger Force Forever. I was quite literally devastated when I got the news that I would never again enjoy an original Brad Neely song performed by the bald, blubbering Babycakes, or I would never again see Master Shake berate Meatwad for dancing, because dancing has always been forbidden (apparently?). However, the first bit of good news is that they announced a new show by the same creator of China IL. Originally titled TV Sucks, a fitting title at the time and also possibly a statement about Mike Lazzo’s questionable decisions as of late, the show has since been renamed Harg Nallin Sclopio Peepio…and Neely seems very excited to jump write in (puns!).

This entry was posted in Random and tagged 2016, Adult Swim, Cartoon Network, Cartoons.

We would like to present to you, the face of ToastedToons in all of his glory: 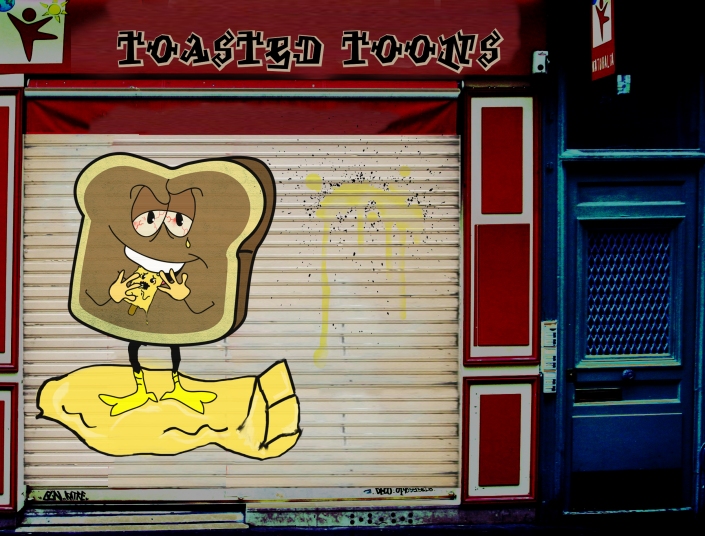 Wonderful isn’t he?  We’d just like to thank our friend Mitch Webb for creating such a magnificent creature.  Hopefully soon we’ll be able to animate him and add a voice track in.  And then we’ll have our first piece of animation ever.  So look forward to that.  Thanks.